by KoreaGameDesk Team
in Gaming, Mobile
0 0
0

PlayersUnknown Battleground Mobile, better known as PUBG Mobile, is arguably the most popular mobile titles that anyone has seen in recent times. The popularity of the game made it one of the top-grossing mobile games since its official launch back in 2017, with an estimated earning of over $1 Billion from in-player spendings and over 70 million downloads. Looking at the popularity of PUBG Mobile, Krafton Inc, its developing company, has recently announced a new version of the game known as PUBG: New State. The game will be set in 2051 with new maps, weapons, and a lot of other features.

PUBG: New State will be available on Android and iOS devices, and here are the complete details regarding it.

As of now, PUBG: New State has no official release date though we can expect it to launch this year globally except in India, China, and Vietnam. However, the game has been made available for pre-registration for Android devices and will come to iOS devices at a later date.

Welcome to the official Twitter for PUBG: NEW STATE, the latest title by KRAFTON, Inc. and PUBG Studio, the creators of the original battle royale, PLAYERUNKNOWN’S BATTLEGROUNDS.

Make sure to follow us for the latest news! pic.twitter.com/yjUu6t1wkv 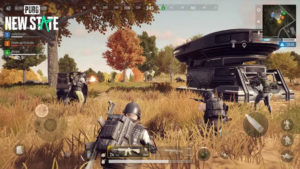 Currently, you cannot download PUBG: New State since the game is not officially out yet. Although you can pre-register for it on Android devices by following the steps mentioned below:

Note: PUBG: New State requires devices with Android 6.0 or higher and a minimum of 2.5 GB RAM, so make sure that your device meets these requirements.

As mentioned above, the pre-registrations on iOS devices will start in the future, and players will be able to pre-register for it using these steps:

Since PUBG: New State hasn’t been released yet, there is no APK download link available for the game, but we will update the article once it gets launched.

As mentioned above, the game is set in the future around the year 2051; as per the official announcement, it will introduce a brand new 8×8 map known as Tron. The map will feature various new landmarks with distinct characteristics and a unique environment with interactable objects. It will help players to come up with new ways and strategies to dominate the matches. The game will be running on the same graphics engine as PUBG Mobile, known as Unreal Engine 4. Along with this, the game will also bring drones, electric cars, new weapons, along with intractable environmental objects to take the gameplay experience to new heights.

Mantisco’s New “Hunter’s Arena” will be built as Web3.0 Game with Immutable X