According to the report, HYBE Interactive Media had signed a publishing contract with South Korea famous content company, Macovill. This contract includes two of their upcoming mobile MMORPG: Project OZ and Project B (also known as Project Bosco/BattleLeague).

The first project is Project OZ: a fantasy collectible RPG.

Developed by Macovill, Project OZ has gained a lot of attention since its first announced back in January. It tells the story of the main character Dorothy, who challenges a powerful goddess with her friends. You will follow Dorothy to her new world ruled by evil witches and build your kingdom with other partners to save the world.

Now, will Dorothy be truly the Queen everyone had been waiting for? 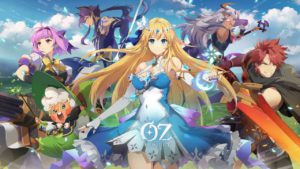 Project B: A Strategy Simulation RPG

Next we have Project B, also known as Project Bosco & BattleLeague. It is a strategy simulation RPG where players encounter a store full of magical instruments. Plus, the BattleLeague version will reportedly involve NFT contents.

Gaining attention from warrior and wizards all around the continents, the Bosco store is full of all kinds of magical treasures you can imagine. In the game, you will meet the main character, Yutah, a brave young fighter with all the ruckus happening inside his store.

Located in the world of chaos full of doppelgangers, King of Belfona, Rugal, decided that everyone must fight to prove that they’re the originals. Countless mercenaries began flocking to the battle. And they fight to prove themselves.

At the same time, this project will include NFT contents with the name Project BattleLeague. In this version of the game, we would witness the desperate battle between Yutah and the red-haired knight, Rygar.

Meanwhile, players will be able to summon and collect heroes and mercenaries. You will then form your own army and experience various combat elements and gameplay. 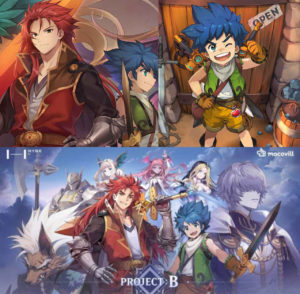 Finally, the collaboration between HYBE IM and Macovill brings a fresh start and new promising competition in the gaming industry, especially in South Korea.

HYBE IM previously managed to bring a new wave of fresh players with the success of BTS Island: In The SEOM. Although the company may be new in the gaming niche, HYBE Corp has a prominent reputation in the entertainment industry in general. Not to mention that the company is the home of Kpop megastar, BTS. Therefore, anticipations are always high every time HYBE brings new projects to the public.

At the same time, Marcovill is a rising company founded in 2020, famous with its Baby Shark Run Away and Cheetahboo Super Dash.

Both companies stated that the two projects will share the same worldview with an extensive long-term IP goals.

“It is an honor to present ‘Project OZ’ and ‘Project B’ to players through HYBE IM. We will do our best to create these two games so that they can be recognized by players in the global market.”

Meanwhile, HYBE IM CEO declared that they would combine the company’s global game operation with Macovill’s superior development capabilities. That way, players can expect HYBE and Macovill to bring fresh gaming experience in the market with their upcoming new RPG games.

Besides, with HYBE company involved, there is also a chance that Kpop supernova BTS will also be on board.

Are you excited about HYBE x Macovill new games? Stay with us and we will keep you updated.

Kpop Game Sensation “BTS Island: In The SEOM” Nominated for Korea 2022 Game of the Month